Have I Saved Enough Money? 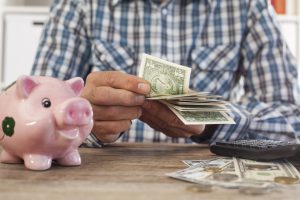 Andrew Walberg and I had been friends since first meeting in Mr. Carlson’s government class when we were juniors in high school.  He was so much fun to be around, always positive and upbeat.  I had not heard from him in a while so I was surprised to hear his voice on the other end of the telephone.

“Hey, this is Andy.  How have you been? I’ve known you’re in the financial services business, but I have never taken the time to talk to you,” he started.  “I want to come and talk to you but first I am calling to find out if you would be willing to talk to my dad.  He is now 55 and is getting really nervous about retirement.”

“Of course I would talk to your dad.  How can we set up an appointment?”  I said.

“Well, he is right here do you want to talk to him now?”  Andy said.

“I am going to put you through to my assistant and she will set up an appointment.  Why don’t you come to the appointment also, if it is ok with your dad.”  I said.

The following week at the set time, Andy and his dad Karl, came to my office right on time.  I extended my hand and said, “Wow, it is so good to see you. How have you been?”

After a few pleasantries, we got down to business.  Mr. Walberg was overly nervous about whether he was going to be able to retire and if he had saved enough.

“Ok, you are probably right,” Mr. Walberg said.  “But one of my main questions is should I start saving more?”

“The short answer is yes,” I said grinning.  “But let’s take a look at where you are at currently.  I am going to use my Truth Concepts software – in particular the Qualified Plan calculator.  I am going to ask you a few questions so we can get an accurate feel for where you are now and how to get to where you want to be.  First question:  When did you start your current job?”  I asked

“I changed jobs when I was 34, and have worked at this place ever since,” he answered.

“And how much would you say your adjusted gross income has averaged?

“Well, I had to work there for a year first, but yes, as soon as I could I started to put money in.  And I rolled $25,000 from my previous company’s program,” he recalled.

“Great.  You have been wise to set that money aide.  I will put those numbers here,” I motioned to my screen.  “How much have you been putting into your account every year?”

“Well, when I first started the company would match us 100% for the first $3,000.”  Mr. Walberg said. “I just figured I would go for the match and double my money.  I have done that faithfully every year since.”

“Great. Do you know what kind of return you’ve had on that account?”  I asked him. “If you’ve been lucky probably around 8%.”

“I am not completely sure what my returns have been,” Mr. Walberg said.  “It goes up and down. Some years it seems like it goes up only by the amount I put in, but the last statement said something close to 6% I think.  Go ahead and use 8%.” 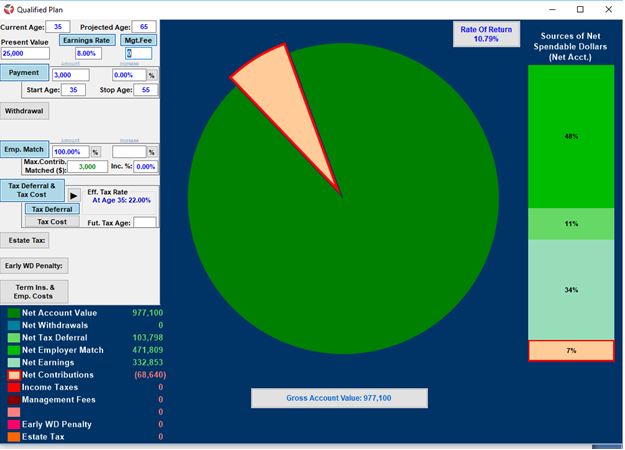 “Almost a million dollars?” Mr. Walberg exclaimed.  “If I had that much I would not be here talking to you. I don’t have that much in my account.  Nor have I enjoyed almost an 11% return on my account.”

“This calculator is doing calculations just based on what we put in.  With a nice match from your employer, it seems like there should have been a 10.79% gain.  However, there are a few factors we haven’t incorporated yet.  Before I discuss those though, I wanted to show you this number,” I explained.  “You may not have been given all the information when you signed up for the 401(k).  You see all these years you have been paying management fees.  Generally, those fees, paid from your account, are in the ballpark of 4%.  But to be on the conservative side I will put 3%,” I finished and motioned to my screen. 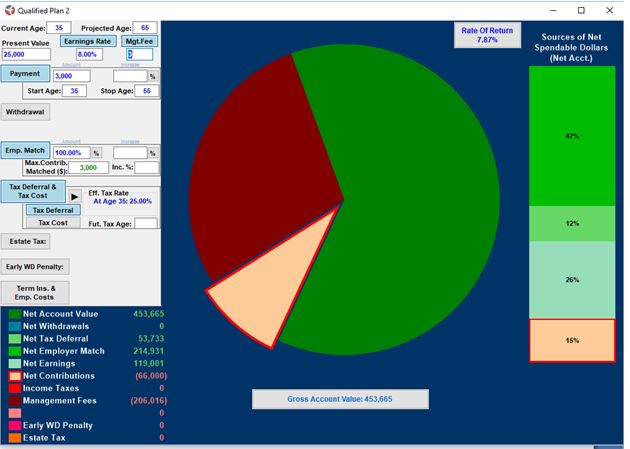 “That number is pretty close to what I have, but still a little high,” Mr. Walberg said.

“Before we make any changes, I want to point something out,” I told him.  “Mr. Walberg…”

“Ok, Karl.  Did you notice that the rate of return on your account dropped from 10.79% to 7.87%?  In other words, those fees you have been paying have basically wiped out the match you got from your employer. Notice here that the amount of management fees of $206,016 is very close to the benefit from your employer match of $214,931,”  I explained as I pointed to the various numbers. Those fees result in a reduction in your account balance by half a million dollars.”

“Yes, that’s a painful realization, but don’t get down on yourself.  You have done the best you could with what you knew,” I said to him.  “Not to throw salt in that wound, but remember this money will still be taxed.  If you walked away today and just paid the income tax, ignoring the 10% early withdrawal penalty, how much would you have?” I asked. 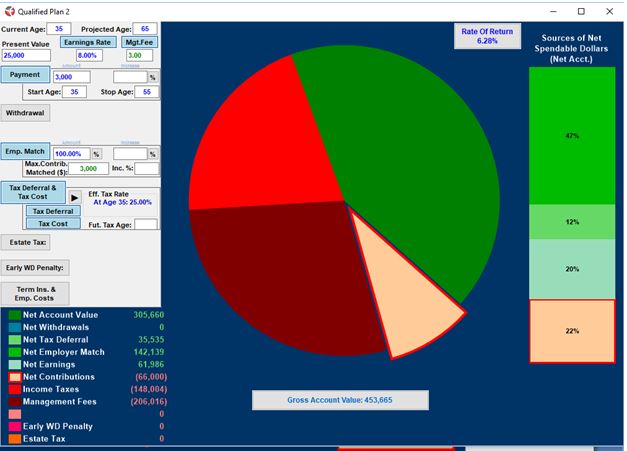 “Well, I like to input the numbers so you can see the whole truth for yourself. Let’s look and see if that information helps you make the decision,” I suggested. 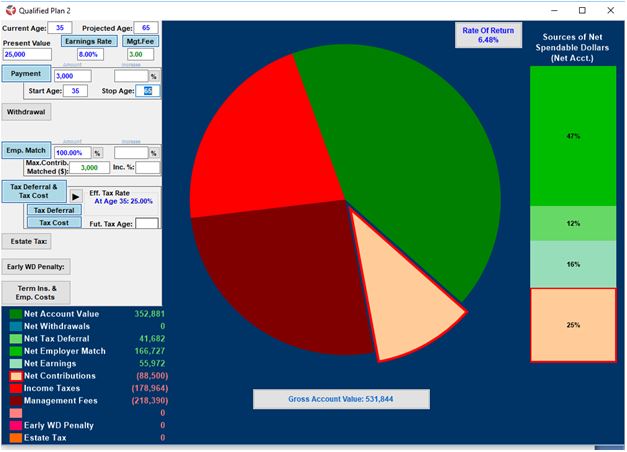 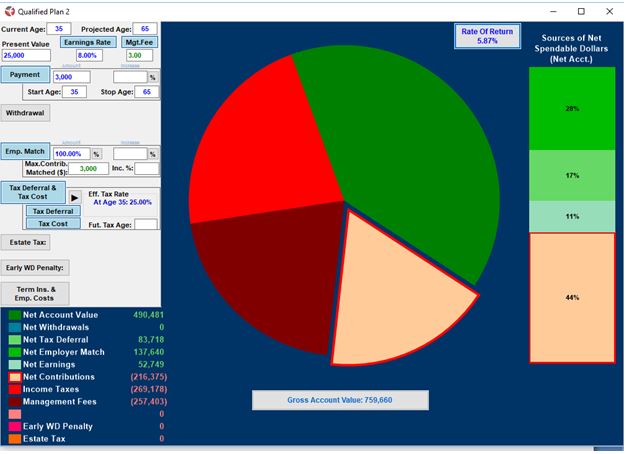 “Almost a half million,” Karl said looking at his son.

“Well, of course not. How is that even possible?” Karl said, clearly frustrated.

“You have to remember that a portion of that additional $15,500 each month is actually Uncle Sam’s money he is allowing you to put into the account,” I explained.  “But be certain, he collects his money at the end. Are you open to an alternative approach?”  I asked.

“Sure, especially if it beats this,” Karl smiled.

“Why on earth would I want to do that?”  Karl looked more frustrated than ever.

“Yes, you are right, it is a bit less” I assured him. “But let’s talk about that cash value for a moment. Your cash value is essentially tax-free, with the continued growth being tax advantaged.  Do you think taxes are going up in the future given all the debt Uncle Sam is building up?”

“Money to pay for the government debt has to come from somewhere,” Karl commented astutely. “Money in my 401(k) would still need to be taxed.” Karl’s face changed. “If taxes are going up I might end up with less than the $137,600,”  he mumbled. “I guess being tax-free and tax-advantaged could be valuable.”

“In addition to the cash value, you will also have a quarter million dollars of paid-up, permanent life insurance,” I said. “How much do you think it would cost to get a term life insurance policy for $250,000 for the next ten years? About $6,000.  So the extra cost for the whole life policy is approximately $4,000. But guess what happens the first year after you retire – when you are 66?  Your cash value will increase about $5,000 even though you do not put another dime into it.  And, it will continue to increase that amount – or more – every single year.”

“Whoa, that is actually a smarter way to go because I wind up with retirement money and the death benefit that increases every year. I’d come out way ahead,” Karl realized.

“Another benefit you need to consider is the fact that no one will be telling you when and how you must remove the money. Are you familiar with required minimum distributions?” I asked him.

“Yes, my uncle was blindsided by that a few years back,” Karl said. “I have a question, what if I decide to keep working; can I continue to contribute to this whole life policy?” Karl asked.

“Yes you can and the numbers shown here will just get better,” I confirmed.

Finally, Andy chimed in, “That policy builds more money each year.  Maybe I should do the same thing and put money there instead of maxing out my contributions.”

“That is a great idea Andy; we should look at numbers for you as well. Let’s set up an appointment.” Turning to Karl I said, “For now, let’s get the paperwork completed for your account.”