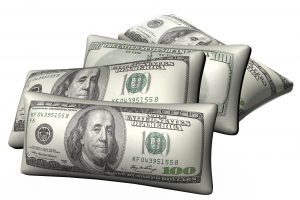 As a result, I did a little extra preparation for the meeting by gathering information about the current cash values of their policies and their other assets. Their 401(k)’s had about $470,000 combined. The cash value of their life insurance policies was $4,588,332. This figure did not include the policies they had purchased for their two sons because they had given the policies to their sons as Christmas gifts a few years back after the boys had helped repay their student loans to the policies.

The business John and Jane had purchased and run for 10 years had been sold and the net proceeds from that sale were $184,000. I also opened the file with notes from all our meetings and read through it. I came across an interesting page of notes from the first meeting. They were 24 years old, newly married, and had $20,155 of credit card debt when they first came to see me at the insistence of Jane’s parents. John had wanted to get rid of the “terrible whole life policy” Jane’s parents had purchased for her when she was a baby.

He was insistent they needed a higher rate of return to get anywhere financially in life. In my notes, I had written a question I posed to them during that meeting: “Do you think it would be possible for the two of you to have $3,000,000 in assets by the time you are 70 years old?” Neither had thought it possible, regardless of the rate of return.

“John, Jane it is great to see you,” I greeted them with a warm smile and firm handshake.

“You have certainly learned to be more direct in your old age,” I joked with him. “No, it is not the time to retire, but it is time to enjoy some passive income for a while. If you retire, according to one definition of the word, you are “taken out of service.” You still have a lot to give back to the community and to your grandchildren. How are they by the way?”

“Absolutely the cutest grandchildren on the planet,” Jane bragged. “If I knew having grandchildren was so much fun, I would have had them first!”

“For many years I have been telling you that when you understood the whole truth, sound financial decisions would be easier to make. I have a calculator that will help guide you as you start to live off your assets. It is called the Distribution Calculator. I have already loaded some information. 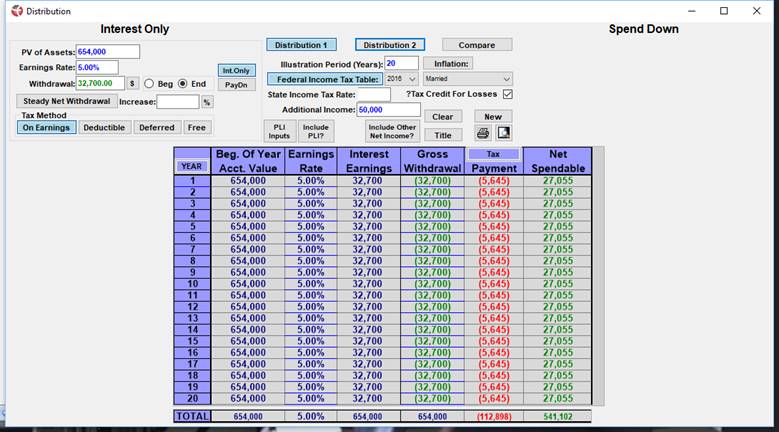 “What are we looking at?” Jane asked.

“That is not as much as I thought we would be able to have,” John said. “We haven’t been extravagant with much. We have saved roughly 12% of our income during our working years. Why isn’t there more?”

“You are also impatient in your old age,” I jokingly said. “But you are hitting on something that most of your peers are facing. Well, your peers who have not had the good fortune of working with our office. You, on the other hand, in addition to that amount, also have the cash values of your life insurance policies. Those are powerful and empowering assets. I am going to change this calculator to show an alternative use of your 401(k)’s made possible by your whole life insurance policies.” 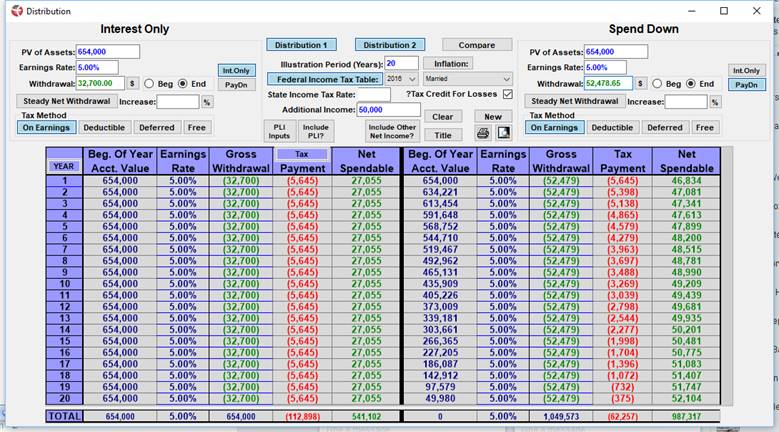 “As I said before, the number labeled “Net Spendable” on the left side of the page, $27,055 per year, is what you will be able to spend if you live off the interest generated by your sum of money. Most people are locked into this scenario because they do not want to run out of money – which, by the way, is the biggest fear of people your age.

“The numbers on the right show how much you’ll have to live on each year by spending the interest and the original principle.”

“The numbers on the right are getting larger every year. Why is that happening?” Jane asked.

“On the right, you are withdrawing principle and interest from the account. Each year your principle is reduced the interest earned is also reduced, which require fewer taxes to be paid.” I explained.

“What happens when we are 92?” John asked. “Remember the life expectancy thing we did several years ago? I am supposed to live to 110. Will we be out of money?”

“The reason you can enjoy the spend down technique is that you have $4,588,332 in cash values of your life insurance policies. In other words, the cash values act as a cushion to you so you can spend all of your $654,000 you have worked so hard to save.”

“There are so many options for you because of those policies. For example, if you think you needed more income, you could annuitize $1,000,000 of your cash values today and have a guaranteed $60,000 a year income for as long as you live. That would bring your annual income somewhere in the neighborhood of $160,000 a year for 20 years and then reduce to about $110,000 when you are 92 ($60,000 from annuity plus $50,000 Social Security). But remember, you would still have $3.5 million in cash values that keeps growing.” I said.

“These are some impressive numbers. There are a lot of trips to the snow cone shack with the grandkids in those numbers. I cannot tell you what a relief it is to not worry about of running out of money. As you said, many of our friends are scared to ‘retire’ because they fear running out of money. I feel bad for them,” John lamented.

“That is the whole point. You have OPTIONS. You get to decide what you want to do and when you want to do it. As long as you don’t do anything really crazy, you will never run out of money. That thought should not only be comforting, it should be exciting.” I said.

“Are you saying you are not going to be around to help us avoid something really crazy?” John asked.

“I am NOT retiring if that is your question. I love what I do and I love helping people understand the whole truth about money and then benefitting from that knowledge to become truly financially free.” I sort of boasted.

“Thank you. I am serious. Thank you for everything,” Jane said.

“Yes we could never thank you enough,” John added.

As they left, I thought about their last statement. Yes, I had made commissions working with John and Jane but that wasn’t the most valuable thing. The process of teaching them and having such long time friendships had a value I could not put a price on.