However, after 5-7 years of funding a whole life policy, the impact of the PUAs appears to lessen. Illustrations of a policy funded with maximum PUAs vs. no PUAs at all show that, several years into the policy, the PUAs no longer have a dramatic affect on the internal rate of return of the policy.

For instance, in one example, adding PUAs to a 12k premium whole life policy for the first five years increased the internal rate of return on the net cash value in the 12th year from only .57% (no PUAs) to 3.29% (with 5 years of PUAs) – a difference of 477%! (See illustration 1.) 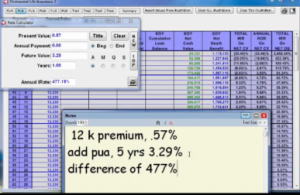 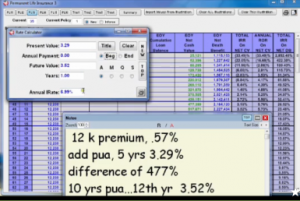 Why is this? Do PUAs become less efficient over time?

And what should the client do? After the initial years of the policy, should a policy holder start a new policy and put their PUAs into the new policy to increase the efficiency of the PUAs? Is the “old” whole life policy not the best place for the client’s PUAs?

To test this, Todd compares the effect of transitioning the PUAs to a second new policy after 5 years to see if the average internal rate of return (of the policies combined) is greater when the newer policy receives the PUA payment as opposed to the older policy. This example is given in the first 15 minutes of Todd Langford’s 2013 Think Tank presentation, along with a related discussion (and a hilarious story) about how the numbers alone don’t always tell the whole truth about a situation. 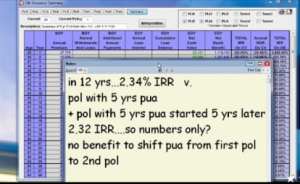 Todd also discovers virtually no difference in internal rates of return when the policies are extended to age 70. (The results are 4.76% and 4.75% IRR of the combined policies when the PUA is shifted from one to the other.) 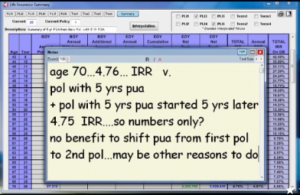 The conclusion? Starting a new policy is not necessary to increase the effect of a PUA.

Therefore, there is no numerical reason to start a new policy to “increase the efficiency of the PUA.”

However, the numbers alone don’t always tell the whole story.

There may be other reasons to start a new policy. As Todd mentions in the video, starting a new policy creates a new “bucket” into which cash can be stored, which may be very beneficial for the client. Each new policy creates an opportunity to store more cash in the way of PUAs. If a client is easily maxing out their PUAs or must prepare for a way to store additional cash, then it may be time to begin a new policy.

The PUA may appear to lose efficiency, but in fact, it does not. It keeps performing as well as it ever did, but the impact lessens because the base premium catches up over time in its efficiency. Therefore, the PUA does not continue to create as much contrast when compared with the efficiency of the base premium.

A very simple metaphor to understand or explain PUAs vs. base premium efficiency might be that of two joggers. If Jogger A gets a 5-minute head start on a marathon, that will put him or her way ahead of Jogger B in the first few miles. However, by the time they both reach the finish line, that five-minute head start will seem much more insignificant. If they progress at the same speed, at an “average” marathon pace, their times will be less than 2% apart.

In the same way, the differences between the efficiency of a PUA and the base premium become negligible as time goes on. Like the first jogger, the PUA gets a “head start” while the base premium is responsible for establishing the foundation of the policy (paying for the death benefit, commission, and other policy costs), which slows it down, initially.

Ultimately, the PUA will earn (or “run”) at the same pace in an existing or a new policy. The PUA does not grow less efficient with time, the base premium simply becomes more efficient, which narrows the contrast between the two.

The only way to start a new policy and have the PUA earn at a greater rate and efficiency than in an existing policy would be to begin a new policy on a child or grandchild. When this is done, typically, the new policy is more efficient because the cost of insurance is less for a younger person. However, as you are limited as to the amount of insurance you can take on a child – often a maximum of half of what the parent is insured for – you will want to make sure that you are adequately insured. 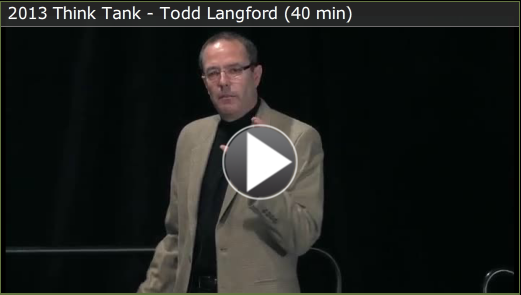